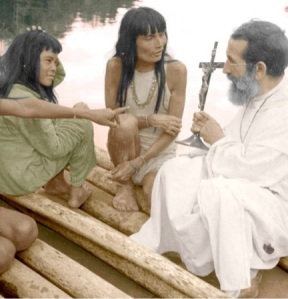 On June 8 1925, we discovered the Malinowski river, and before deciding to return westbound, avoiding an almost 80 meter long river bed that retraced our route, Mr. Dancuart thought it convenient to speak to the native Huarayos.

In less than two hours, our group built an improvised jungle raft made of five buoyant Topa tree logs tied to two or three cross beams-this was our humble watercraft.  After a friendly goodbye to our companions, we let ourselves be swept by the tranquil waves of the Naoo river, as it is called by the natives.  A little further down stream we found ourselves with rip currents so strong that I thought we would ship wreck when we had to cross in between two large trunks that narrowed the channel.  We continued on and a few hours later, our humble raft approached two large boas on right bank-one that was black and curled up around a some tree trunks lying along the bank.  “Should I shoot?” said one of our companions.  I replied: “Nobody move until we reach land!” This wild animal could fall over on our raft and devour one of us or cause us to wreck and get stuck further down stream.  We were shaking from fear and peeking through the brush as we got closer; “you shoot! I don’t dare! Me neither!” said my companions.  Finally, Mr. Lopez took his Mauser and shot twice, aiming at the boas broadside.  We had one foot in the air ready to run, when we saw its blood spill and its body start unwinding and falling into the water.  We could not find the other boa.

At dusk, we landed on a beautiful beach on the river bank, where we spent a memorable night lying on the sand between two camp fires. We had no other change of clothes.  The next day, at 8 AM we started on the Bahuaja (Tambopata) river when we saw across the way,  the natives wearing their dark red kushmas and their arrows slung over their shoulders-they were going hunting.  “Alejandro!….Shehue!” I called out to them.  “Who is it!” they yelled back.  “Papachi!” said Shehue- “Just look at his white clothes (the Dominican Habit)!”  Another native yelled joyfully from across the river and came closer to us to guide us to his canoe and then to their side of the beach.  After a lighthearted chat, we went with them to their small huts where they abundantly served us meat, bananas and yuca which tasted like honey to us since our stomachs were exhausted from the rice and corn meal that was our only food since we left Maldonado.

After sharing with them an enjoyable moment after eating, I told them the object of my commission: to ask for volunteers who wanted to come along with us and help us build a route to the Inambari River; volunteers who could help us with hunting and fishing, procuring fruits, and show us the routes normally taken by natives to the Inambari River.  (Writings I, 11-9; pp. 129-131)

View all posts by Maestro